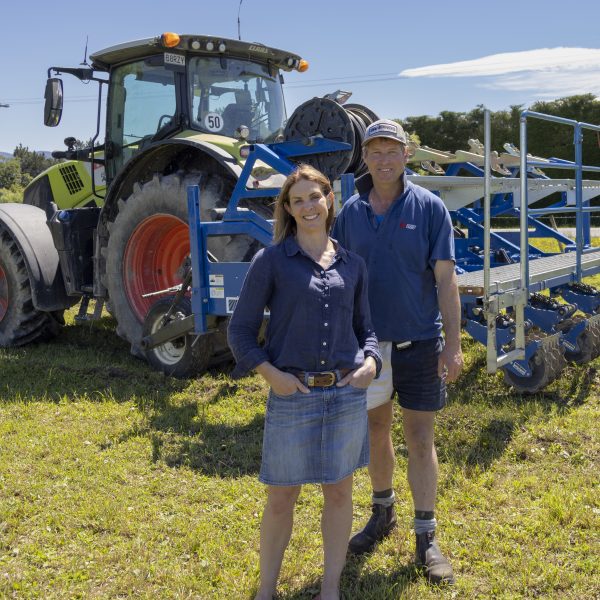 After trialling a subsurface irrigation system last summer, Cust dairy grazers Gary and Penny Robinson are keen to collect data and compare this with traditional irrigation systems to back up their observations with evidence-based results.

The couple are participating in a six-month farming innovation project, which examines how the next generation of farmers are using innovative approaches to improve their farming practices. Waimakariri Landcare Trust (WLT) and Waimakariri Irrigation Limited (WIL) have partnered with the Ministry for Primary Industries (MPI) for the project, with support from MPI’s Sustainable Food and Fibre Futures fund along with Environment Canterbury, Ballance, and DairyNZ.

Gary says he had been interested in subsurface irrigation for some time before seeing the system first-hand at the Carrfields tent at the 2019 Canterbury A & P Show.

“I knew it had been heavily used overseas and once I saw it at the Show, I thought we have to look into this and see if we can make it work in New Zealand. We aligned ourselves with Carrfields regional manager Jeff Denley who planned to learn more about the system at the World Ag Expo in California in early 2020.”

Unfortunately, Jeff was unable to attend the Expo due to work commitments, so Gary and Penny went in his place and observed the system working first-hand by visiting large scale dairy operations in California.

Penny says seeing how subsurface irrigation worked and the longevity of the system, along with the increased pasture growth and environmental benefits convinced them to test the system on a portion of their 160-hectare leased beef and dairy grazing support farm in Cust.

“We decided to go with Netafim as they have a huge amount of R and D behind them and a great track record, along with the market share of the irrigation tape in the USA.

“If it wasn’t for COVID they would have been keen to come out to New Zealand and hold some workshops for local farmers to learn more about subsurface irrigation. We still hope that can happen at some stage in the future.”

Gary describes subsurface drip irrigation as a “game changer,” especially in terms of the environmental benefits it provides for water use efficiency.

“You’re using less water and you’re not wasting water. You are spoon feeding the plant, so it is getting exactly the right amount of water.

“It is a low-pressure system so you can take your water further which allows you to irrigate a larger area of land. If you want to get into fertigation, you can add exactly the right amount of nutrients without washing them away. It could help to solve our nitrate leaching problem.”

The couple are looking forward to gathering data from their system and comparing this with similar farming operations over the next six months so they can prove the benefits of subsurface drip irrigation.

“We’ve seen how it works but now we need the proof so we can show people the facts and figures behind the system and then have a real go of it as a business opportunity.”