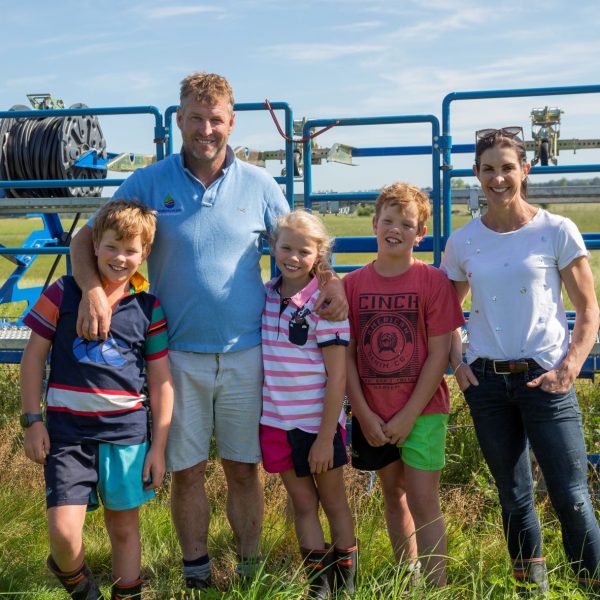 Gary and Penny Robinson with their children Harry, Charlie, and Olivia in front of their subsurface drip irrigation test paddock in Cust

A wetter than usual irrigation season has hindered data collection efforts for Cust dairy grazers Gary
and Penny Robinson. They had planned to collect data over the season from their subsurface
irrigation system and compare this with traditional irrigation methods. However, the couple have
still been able to prove the system’s water and power saving benefits on their two-hectare test
block.
Gary and Penny are participating in a six-month farming innovation project, which examines how the
next generation of farmers are using innovation to improve their farming practices. Waimakariri
Landcare Trust (WLT) and Waimakariri Irrigation Limited (WIL) have partnered with the Ministry for
Primary Industries (MPI) for the project, with support from MPI’s Sustainable Food and Fibre Futures
fund along with Environment Canterbury, Ballance, and DairyNZ.
A subsurface drip irrigation system consists of a network of valves, driplines, pipes, and emitters that
are installed in tape below the surface of the soil. The evenly spaced emitters slowly release water
directly to the root zone of plants which differs from traditional irrigation systems that apply water
to the surface of the soil.
Gary says that while the unseasonably wet season meant that farmers didn’t require much water for
irrigation, the rainy weather stymied efforts to collect and compare data from their subsurface drip
irrigation trial block.
“This was meant to be our data collection season but with the significant rainfall events we have had
all season it hasn’t quite worked out the way we thought it would.”
Despite the uncooperative weather, Penny and Gary were able to gather information on water and
power savings during a drier period in the middle of the season.
“What we found was that over the drier period in December we only had to irrigate every fourth day
and with the emitters putting on two millilitres per hour we only ran it for two hours per day to get
our four millilitres.
“This equates to water savings of up to 25 per cent and you can take that water and spread it out
further over the rest of your land, so it is a much more efficient use of water.
“With the subsurface drip irrigation system, we are not wetting from the top but from under the soil,
so it stays wetter for longer which means you don’t need to irrigate as often, and you also don’t lose
any water due to evaporation.”

The couple also researched power savings and found that it was possible to save up to 50 per cent
on power usage due to the shorter operating time for the subsurface drip irrigation system.
“With a sprinkler system you need to keep it running 24 hours per day but because the subsurface
system doesn’t need to be running continuously you can make quite significant savings on power.”
Gary and Penny have secured another site for a subsurface drip irrigation trial at Angus Aiken’s 550-
hectare mixed cropping and finishing farm in Waiau. The plan is to have the irrigation system
installed in early spring.
Angus, who is a firm believer in technological innovation, says he is keen to see if the system can add
value to his farm.
“We have a limited water resource on this farm and if we can use it more efficiently and spread it
further that would be great. I am keen to make changes that preserve our soil structure, help to
manage nutrients, and improve our water use efficiency, while also improving our crop yield.”